Results: Vildagliptin is a potent and selective DPP-4 inhibitor that improves islet function by increasing ?- and ?-cell responsiveness to glucose. This 52-wk, multicenter, randomized, double-blind study compared vildagliptin 100 mg daily (50 mg bid, n=526) to metformin 2000 mg daily (Met, 1000 mg bid, n=254) in drug-naive patients (pts) with T2DM. The groups were well-balanced at baseline (BL). Mean age, BMI, HbA1c and disease duration were 53.1 y, 32.4 kg/m?2, 8.7% and 2.4 y, respectively. As shown below, both vildagliptin and Met rapidly decreased HbA?1c and this improvement was sustained throughout 52-wk treatment. The adjusted mean change (AM?) from BL to endpoint was -1.0±0.1% in pts receiving vildagliptin and -1.4±0.1% in those receiving Met. The between-group difference in AM? HbA?1c did not establish non-inferiority of vildagliptin 100 mg daily to Met 2000 mg daily in these drug-naive pts. [figure1] Vildagliptin did not induce weight gain (0.3±0.2 kg) and Met-treated pts had a modest weight loss (-1.9±0.3 kg). The incidence of side effects was 70.1% in patients receiving vildagliptin vs 75.4% with Met. The incidence of GI side effects was significantly less in pts receiving vildagliptin (21.8%) vs Met (43.7%, P<0.001). Diarrhea was reported by 6.0 vs 26.2% of pts receiving vildagliptin vs Met; nausea, by 3.3 vs 10.3%; abdominal pain, by 2.3 vs 7.1%; dyspepsia, by 1.2 vs 4.8%; and vomiting, by 2.1 vs 4.4%. A mild hypoglycemic episode was reported by 3 vildagliptin-treated patients (0.6%) and by one Met-treated patient (0.4%). Conclusions: 1) a clinically meaningful reduction in HbA?1c is sustained throughout one-year treatment with vildagliptin 50 mg bid, 2) vildagliptin is well-tolerated and associated with fewer GI side effects than metformin. 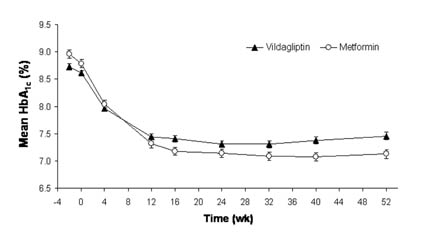 Aim: To examine the mechanisms via which vildagliptin improves glucose tolerance and reduces FPG in T2D.

Results: Development of T2DM is characterized by loss of the AIRg and impaired insulin sensitivity (Si). This study examined the effect of the DPP-4 inhibitor vildagliptin (50 mg bid, n=7) or placebo (PBO, n=5) on AIRg and Si determined during frequently-sampled IV glucose tolerance tests (FSIVGT) performed in drug-naive patients (pts) with T2DM before and after 12-wk treatment (Rx) and after 2-4 wk washout from study drug. At baseline (BL) mean HbA?1c, BMI, age and disease duration were 6.8±0.1%, 30.9±1.8 kg/m?2, 56±2.5 y and 3.9±0.8 y. Plasma levels of intact GLP-1 were not significantly increased during the FSIVGTs which were performed after overnight fast. In the PBO group, AIRg and Si did not change from BL to Wk 12. In vildagliptin-treated pts, AIRg increased from 16±7 at BL to 54±9 pM at Wk 12 (P<0.001 vs BL or PBO); Si increased from 1.4±0.3 at BL to 2.2±0.5 L/mU/min at Wk 12 (P=0.016 vs BL). Figure 1 depicts the disposition index (DI=AIRg x Si) at BL, Wk 12 and after washout. The DI increased >4-fold during vildagliptin Rx and a part of this effect remained after washout.[figure1]HbA?1c decreased from 6.7±0.5% at BL to 6.3±0.5% at Wk 12 (?=-0.5±0.3, P=0.013) in the vildagliptin group but did not change from BL (6.9%) in the PBO group. Conclusion: 12-wk Rx with vildagliptin improves ?-cell function and attenuates insulin resistance in drug-naive pts with T2DM independent of acute increases in plasma GLP-1. Because a part of the improvement is maintained after a 2-4 wk washout, vildagliptin may exert some disease-modifying effect.

Results: Vildagliptin is a DPP-4 inhibitor that lowers glucose in patients (pts) with T2DM primarily via glucagon-like peptide-1 (GLP-1)-mediated improvements in islet function. Vildagliptin decreases HbA1c when given as monotherapy or in combination with metformin but its efficacy in pts with more advanced disease requiring insulin (Ins) is unknown. This 24-wk, multicenter, double-blind, randomized study compared effects of vildagliptin 50 mg bid vs placebo (PBO) in 256 pts with T2DM inadequately controlled (HbA?1c 7.5-11%) by Ins (>30 U/day). Pts had received no oral agent in the previous 3 mos and Ins dose adjustments were allowed during the study. The treatment groups were well-balanced at baseline (BL). Mean age, BMI, disease duration, FPG and HbA?1c were 59 y (32% over age 65), 33.0 kg/m?2, 14.6 y, 9.3 mM and 8.5%, respectively. Mean duration of Ins use was 76 mo, mean daily dose was 82 U. Pts had multiple co-morbidities and 45% were taking >5 concomitant medications. Table 1 reports the adjusted mean change (AM?) from BL to endpoint in HbA1c and daily Ins dose in the two treatment groups. [table1] In pts =65 y, HbA1c decreased by 0.7±0.1% in the vildagliptin group vs 0.0±0.1% in the PBO group (P<0.001). Hypoglycemic events were less common and less severe in vildagliptin-treated pts (33 patients, 113 events, 0 severe) than in those receiving PBO (45 patients, 185 events, 6 severe). The incidence of side effects was similar in pts receiving vildagliptin vs PBO. Conclusion: adding vildagliptin to Ins in pts with T2DM is well-tolerated and associated with a significant reduction in HbA1c, particularly in older individuals, and despite clinical insulin resistance. The mechanism underlying the reduced frequency and severity of hypoglycemia in vildagliptin-treated pts receiving Ins may reflect improved ?-cell glucose sensing and merits further investigation.

Results: Although vildagliptin improves ?-cell function and reduces postprandial glucose (PPG) in patients (pts) with type 2 diabetes (T2DM), it does not increase post-meal insulin levels during 4-12 wk treatment in pts with T2DM, nor after a single dose given before a 75-g OGTT in healthy subjects. To explore this apparent conundrum, we extract data from two studies of vildagliptin in diet-treated pts with T2DM. In Study 1, 16 pts (mean BMI, HbA?1c, FPG and fasting insulin = 30.0 kg/m?2, 8.0%, 8.3 mM and 96 pM) received a single oral dose of vildagliptin (100 mg) or placebo (PBO) in a randomized crossover manner with =72 h interdose interval, 30 min before a 75-g OGTT. In Study 2, 9 pts (mean BMI, HbA?1c, FPG and fasting insulin = 31.8 kg/m?2, 7.5%, 8.9 mM and 212 pM) received PBO on Day -1 and vildagliptin (100 mg) on Day 1, 30 min before a breakfast meal test, during a 28-day, double-blind, randomized, PBO-controlled trial. Table 1 summarizes DPP-4 activity at 2-h post-dose, mean post-load plasma levels of intact GLP-1, GIP and insulin (AUC/time), and plasma glucose levels 1.5 h post-load. A single dose of vildagliptin produced essentially complete inhibition of DPP-4 and increased post-load levels of intact GLP-1 and GIP during OGTT or meal test. The mixed meal was a stronger stimulus than OGTT for GIP release, but the glucose load imposed by OGTT, as reflected by peak glucose levels, was nearly twice that of the mixed meal. Vildagliptin significantly increased plasma insulin levels after OGTT but not after the mixed meal.[table1]Conclusion: an acute insulinotropic effect of vildagliptin is observed in patients with T2DM only when the glucose load provides a strong independent stimulus for insulin secretion

Results: Vildagliptin is a DPP-4 inhibitor that improves glycemic control via incretin hormone-mediated improvements in islet function. Data from animal studies suggest that GLP-1 can reduce intestinal TG absorption and GIP improves chylomicron TG clearance. The present 4-wk study examined effects of vildagliptin 50 mg bid (n=15) vs placebo (PBO, n=16) on postprandial lipemia in drug-naive patients (pts) with T2DM. A lipid-rich meal was given before and after 4-wk Rx: total serum TGs and cholesterol, and TGs, cholesterol and apoB-48 in the chylomicron (Sf>400) and VLDL/IDL (Sf 12-400) fractions were measured for 8-h post-meal. In pts randomized to PBO, postprandial lipids did not change or tended to increase from Wk 0 to Wk 4. In contrast, as shown below, 4-wk Rx with vildagliptin markedly decreased post-meal total serum and chylomicron TGs. [figure1] Relative to PBO, 4-wk Rx with vildagliptin decreased the AUC0-8h for total TG by 22±11% (P=0.037), the incremental (?) AUC?0-8h for total TG by 85±47% (P=0.065), the AUC?0-8h for chylomicron TGs by 65±19% (P=0.001) and the ?AUC?0-8h for chylomicron TGs by 91±28% (P=0.002). This was associated with a decrease in chylomicron apoB-48 AUC?0-8h (?= -1.0±0.5mg/L•h, P=0.037) and chylomicron cholesterol AUC 0-8h (?= -0.14±0.07 mM•h, P=0.046). Consistent with previous studies, relative to PBO, 4-wk Rx with vildagliptin also increased intact GLP-1 and decreased glucagon, fasting and postprandial glucose and HbA?1c (from a baseline of 6.7%, ?= -0.4±0.1%, P<0.001). Conclusion: vildagliptin decreases postprandial lipemia by decreasing chylomicron production and/or increasing chylomicron clearance.

The Influence of Hepatic Impairment on the Pharmacokinetics of Vildagliptin

Objectives: Vildagliptin is a potent DPP-4 inhibitor in clinical development for the treatment of type 2 diabetes (T2D). The primary metabolic pathway is hydrolysis and liver is one of the major organs that contributes to this process. The objective of this study was to investigate the effects of hepatic impairment (HI) on the PK of vildagliptin. Methods: This was an open label study in patients with mild (n=6), moderate (n=6) and severe (n=4) HI and subjects with normal hepatic function (n=6). Each subject received a single oral dose (100 mg) and blood samples were collected for measuring the concentrations of vildagliptin and its major metabolite (LAY151, pharmacologically inactive) with LC-MS/MS. Results: The PK parameters of vildagliptin and LAY151 are summarized in the table below. The exposure (AUC) to vildagliptin was increased by 30% in subjects with severe HI compared to the healthy subjects. There was considerable variability in the values for Cmax and AUC among all groups and there was no correlation between the exposure and the severity of HI. The elimination t?1/2 of vildagliptin was unaffected by HI. Exposure to the inactive metabolite (LAY151) increased in subjects with HI and correlated with the severity of HI. Vildagliptin 100 mg single dose was safe and well tolerated in subjects with HI. Conclusions: Exposure to vildagliptin is slightly increased in subjects with severe HI, however, this is not of clinically relevant. Therefore, no dose adjustment is necessary in subjects with HI based PK.[table1]